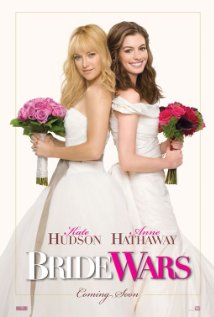 Not recommended under 8 and parental guidance to 13 (Themes)

Emma (Anne Hathaway) and Liv (Kate Hudson) have been friends for life but their friendship is sorely put to the test when both girls become engaged at the same time, and choose the same, sought after wedding director, Marion St. Claire (Candice Bergen) to arrange their weddings. Unfortunately a booking error is made and both girls have their weddings booked on the same day. When neither of them is willing to change the date (which involves a long wait), they both try to sabotage each other’s special day.

There is nothing particularly scary in this movie, but it will probably lack interest for this age group.

There is nothing particularly scary in this movie, but it will probably lack interest for this age group.

There is lots of drinking of alcohol in various venues: at home, at parties, in pubs, nightclubs, etc

Bride Wars is a comedy about two women vying for the best wedding. It could be of interest to some teenage girls but is likely to have little broad appeal. The main message from this movie is that uncompromising attitudes can lead to unhappiness and disaster.
This movie could also give parents the opportunity to discuss with their children attitudes and behaviours, and their real-life consequences, such as.

This movie could also give parents the opportunity to discuss with their children the importance of relationships, friendships and  marriage.