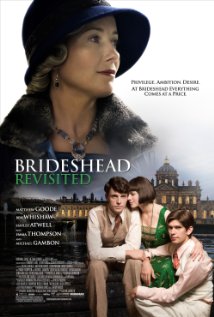 Not recommended under 13, PG to 15 due to themes, sexual activity and nudity.

Based on Evelyn Waugh’s 1945 novel, Brideshead Revisited follows the story of Charles Ryder (Matthew Goode) an aspiring artist who leaves his modest home and indifferent father to study history at Oxford. There he is befriended by Sebastian Flyte (Ben Wishaw) a wealthy homosexual who uses alcohol to ease his conscience. Sebastian invites Charles to spend the summer with him at Brideshead, the lavish estate where he lives with his mother the pious Lady Marchmain (Emma Thompson), his sister Julia (Hayley Atwell) and brother Bridley (Ed Stoppard) all of whom are deeply religious Roman Catholics. Despite the fact that Charles is a self proclaimed atheist, they are charmed by him and encourage him to “look after” Sebastian.

Charles is dazzled by the beauty of Brideshead and also by Julia whom he adores. Although Julia is captivated by Charles she refuses to go against her mother’s wishes and instead marries a Catholic man whom she does not love. Charles leaves broken-hearted. Sebastian too is broken-hearted as he realizes that Charles cannot love him the way that he desires and he begins to drink more heavily.
Charles goes on with his painting and enters a loveless marriage. It is four years before he associates with the family again. Eventually Lady Marchmain approaches him and begs him to help her find Sebastian who has disappeared in Morocco. Charles discovers Sebastian convalescing in a hospital, where the ravages of alcoholism have taken their toll. Sebastian remains in Morocco and his mother dies without seeing him again.

Charles spends two years painting in the jungles of South America and returns to England as a celebrated artist. On a ship he encounters Julia and after a whirlwind affair they decide to run way together. Charles promises to settle things with her husband and they return to Brideshead where the religious atmosphere casts a shadow over their love and slowly destroys it.

Brideshead Revisited is a slow paced, drama featuring some beautiful locations that will appeal to mature audiences and fans of the book. Children are likely to find it extremely dull.

The main messages from this movie are to be true to yourself, to beware of greed and that love, while precious, is also painful.
Values in this movie that parents may wish to reinforce with their children include: