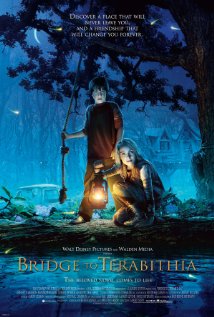 Not suitable under 8; parental guidance to 13 (Scary images, themes)

Bridge to Terabithia is based on a book by Katherine Paterson. The movie opens with one of the main characters Jess (Josh Hutcherson), doing a long training run for a big race that he is hoping to win. He is one of five children with two older and two younger sisters. His family is in financial strife so his parents are preoccupied and pay little attention to him. He craves the attention of his father but his father doesn’t notice this. The only sister that he relates to somewhat is his younger sister May Belle (Bailee Madison). He is a loner at school, and bullied constantly by the other boys.
On the day of the race a new girl, Leslie (AnnaSophia Robb) arrives. She is different from the other girls both in her dress and behaviour. The race is only supposed to be for boys, but at the last minute, Leslie joins in.  Jess is faster than all the other boys and it looks as if he is going to win easily but at the last minute Leslie races past him. Although angry with her at first, he begins to talk to her on the way home and they become friends. Leslie is an only child from a happy home but her parents are writers and tend to neglect her when they are writing.
With parental neglect in common, Jess and Leslie form a bond. They also have another thing in common. Both have excellent imaginations. Jess can draw and Leslie can write. Each day after school the two of them head off to a secret place which they reach by swinging over a river using an old rope. On the other side is a land called Terabithia that they create for themselves. It has trolls, an evil dark master and scary animals.
Through the adventures that Jess and Leslie create for themselves they also figure out ways to deal with the bullies and the difficulties that they face both at school and at home.

The death of someone close, bullying

Some references to boyfriends and girlfriends being in love

Bridge to Terabithia is an appealing adventure film with some fantasy elements based on a well-known children’s book. Its main message is the value and importance of friendship and how, when supported through friendship, people can overcome difficulties that initially appear insurmountable. It also highlights the importance of imagination and how the use of imagination can help solve problems and open up different worlds.

Parents may also wish to discuss how unpleasant and unnecessary bullying can be and the grief and guilt which can follow the accidental death of someone close.