Bring The Soul: The Movie 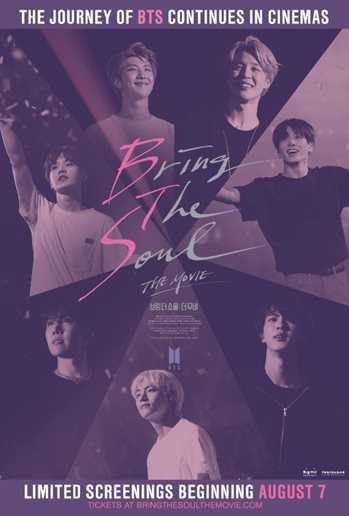 Parental guidance under 10 due to use of substances. Suitable for audiences 10 years and over.

Bring The Soul: The Movie takes viewers on a world tour through Asia, North America and Europe with the Internationally acclaimed Korean pop group, BTS. Audiences get a behind-the-scenes look at what life is like on tour for group members: RM, Jin, SUGA, J hope, Jimin, V and Jung Kook. Getting a glimpse of some of the highs and lows of performing, audiences will witness the individuality of the group members and watch as they inspire countless millions across the globe with their positive messages about love and belonging and being true to yourself. Footage of each destination is woven into the fabric of this story and it is interesting to see how such a wide, cross-section of humanity have been influenced and moved by their music. The dedication of BTS to their fans and their consideration of those accompanying them on the journey is both refreshing and praiseworthy, though it does come at a cost.

Sacrifices group members make for success; what fame can look like and what it costs; relationships; the power of music; and the importance of loving yourself.

Bring The Soul: The Movie is a behind-the-scenes style documentary about what life is like on tour for BTS. The film will appeal to female audiences and fans of the Korean pop stars.

The main messages from this movie are to always do your best, to love yourself and to look with grateful eyes at the world before you.