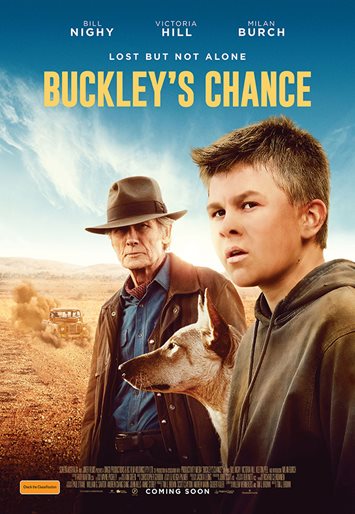 Not suitable under 10; parental guidance to 13 (violence, language, perilous scenes)

Struggling to cope with the death of his heroic father, Ridley (Milan Burch) is expelled from numerous schools and his grieving mother, Gloria (Victoria Hill), is left with no choice but to leave New York and seek out the only family they have left, her husband’s estranged father, Spencer (Bill Nighy), who lives on a sheep station in a remote region in outback Australia. Despite the best efforts of Jules (Kelton Pell) his father’s childhood friend, Ridley hates his new life. He hates his grandfather’s indifference; he hates the isolation; and he hates the hard work. Ridley’s only bright spot is the camera his father got for him shortly before he died, and he does his best to capture interesting and unique things on film. After saving a solitary dingo, whom Ridley later names Buckley, from a barbed wire fence, the pair become inseparable. When two local guys, who want part of Spencer’s land, show up late one night, Ridley begins to film their attempt to burn the sheep shed down. Before they can really get started, they are interrupted, and Ridley is forced to hide in the back of their truck. Ridley continues to film them at their hideout the following day until the guys catch him and he is locked up. Ridley manages to escape into the outback and must, with the help of Buckley, not only try to find his way home, but also fight to survive against the elements of a hostile land.

Death of and separation from a parent; Family breakdown; The struggle for survival in harsh and unfamiliar environments.

Buckley’s Chance is a family style drama with a fairly predictable storyline about a boy and his dog, or in this case, a dingo. This film will likely be enjoyed by preteens and foreign audiences keen for a small glimpse of Australia.

The main messages from this movie are that you can’t have strength without struggle; and that each of us has a place and if you persevere eventually you will find your way home.