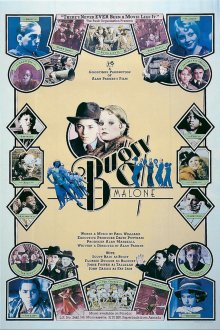 Not suitable under 7; parental guidance to 9 (frequent trivialised violence and adult themes including flirtatious behaviour, alcohol consumption and illegal business)

It's 1929 in New York – prohibition, illegal entertainment hotspots, so-called "speakeasies", and mobster gang wars are in full swing. In particular, Fat Sam (John Cassissi) is in trouble because his arch enemy, Dandy Dan (Martin Lev), is taking over the gangster scene with the help of a novel weapon, the "splurge gun", a cream-filled gun that is much more effective in eliminating competitors than the old-school cream-pie-in-the-face. Caught in the middle of all of this is Bugsy Malone (Scott Baio), who wants to help Fat Sam to defend his stance, but gets distracted trying to win the heart of Blousey Brown (Florrie Dugger) – a talented singer at Fat Sam's speakeasy – while also fending off seductive songstress Tallulah's (Jodie Foster) advances.

There is a lot of violence in this movie, however, parents need to be aware that in this spoof of serious gangster movies, all weapons are replaced with cream pies and replica guns that fire cream. While this leads to a lot of absurd-funny scenes, these cream-filled weapons still represent real weapons, which are used to seriously harm and eliminate enemies. Below are some examples:

Bugsy Malone is a quirky 1976 mobster musical. With a phenomenal all-child cast including a teenage Jodie Foster, catchy musical tunes, and lots of creativity, this film definitely offers novel entertainment for the family. Parental guidance is highly recommended for viewers under 10, pointing out that this whole film is based on children acting as adults, and thus the child, tween, and teenage actors engage in activities that would not be appropriate for children. Young viewers need to understand that the weapons may be filled with cream but still represent gang violence, that some characters are extremely funny and likeable but are involved in criminal activity, and that some of the outfits and behaviours of some of the female cast would not be appropriate in children.

The main messages from this movie are that one needs to keep up with the beat of the time to stay successful, but at the end of the day nothing good comes from fighting fire with fire, and one is better off to make peace and cooperate.