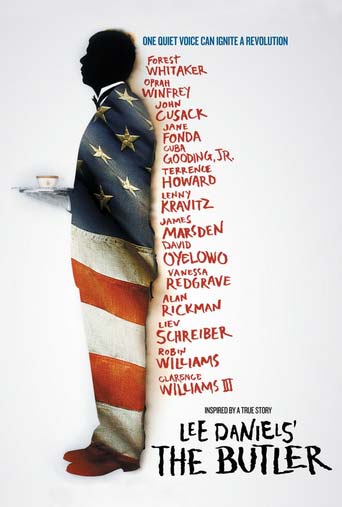 Not recommended under 13, PG to 15 (Violence; Disturbing scenes and themes)

The Butler is based on a true story. Cecil Gaines (Forest Whittaker) has a hard start to life working in a cotton field in Georgia during the 1920s. There he sees his mother abused and raped by the son of the plantation owner and his father shot dead by the same man. As soon as he is old enough, he leaves the plantation to find work out in the real world. This is much harder than expected and when he has to rob a store to get some food, he appeals to the cook’s better nature and asks him to take him in. This he does and trains him to be a ‘house nigger’.

Cecil is so good at his job that he is spotted by an employee of the White House where he is offered a job as butler during Eisenhower’s term as President. Cecil goes on to serve eight different presidents during a time of many momentous events including as the Civil Rights Movement and the Vietnam War. One of Cecil’s sons Louis (David Oyelowo) joins the Civil Rights Movement and later, the Black Panthers, which causes much division between them.  Eventually Louis is estranged from his father. All of these events have much impact on Cecil’s life and that of his wife Gloria (Oprah Winfrey) as well as on American society.

The Butler is a drama based on a true story which is both heart wrenching and triumphant. It is a long film, spanning many years from the time of slavery, covering the Civil Rights Movement and years up to the eventual election of Barack Obama. It is historically important to realise that all this happened during the life of one man. Due to the themes and a number of violent and disturbing scenes the film is more suited to older teens and adolescents as well as adults.

The main messages from this movie are that people shouldn’t be discriminated against because of the colour of their skin and that it’s important to stand up for what you believe in.