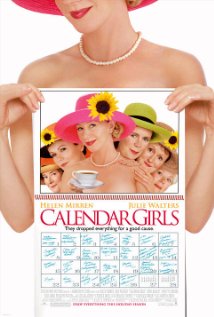 The women of Knapely, a small town in Yorkshire, meet regularly at the Women’s Institute to hear speakers on such subjects as jam making and how to cook broccoli. However, one of the women, Annie Baker has a husband who has been diagnosed with leukaemia. John Baker’s health rapidly degenerates but before he dies he writes a poem to Annie in which he says that Yorkshire women are like flowers – “they are most glorious in their last stage”. After his death Annie wants to raise money for the leukaemia unit so together with her good friend Chris they decide to make a calendar in John’s memory. However they want the women from the Women’s Institute “in their last stage” to pose (discreetly) nude which raises considerable concern from the ladies as well as the Women’s Institute hierarchy.

The women are persuaded that the photographer won’t see them nude and that all the “important bits” are covered for the photo and so they get enough volunteers. One of the women, Ruth, takes much persuading as she feels her husband wouldn’t agree to it, which he doesn’t. Ironically her husband is having an affair with another woman which Ruth uncovers and therefore feels free to do the calendar. Chris’s husband on the other hand, is very supportive of her, but her teenage son Jem is highly embarrassed and starts acting anti-socially.

The calendar becomes a huge success and the women are invited to Hollywood to appear on a Tonight Show where they are treated like royalty. At first Chris decides not to go as she feels Jem needs her at home but she finds it hard to resist the fame and heads off to meet up with the other women. Hollywood invites problems of its own but the ladies have to sort through these issues. The calendar to date has raised 578,000 pounds.

There are quite a lot of sexual references in this film including the following:

There is some brief nudity in this movie which is integral to the story and mostly done in a respectful way. Chris’s breasts are fully shown briefly and one of the women is photographed with a pile of currant buns in front of her – the cherries on top are placed strategically to look like nipples. Most of the photography of the women is done so that not a lot is exposed, apart from cleavage and buttocks.

The girlie magazine under Jem’s bed shows breasts not fully exposed and a girlie calendar in a mechanic’s shop with semi nude pictures from where Chris gets the idea. Neither of these is respectful to women.

There is some use of drugs and alcohol. Jem and his friend drink wine out of a bottle and share a joint. Jem is arrested for possession but is not charged because the ‘joint’ contained oregano not marijuana.

There is a quite an amount of coarse language in this movie including many uses of the following words:

There isn’t really any take home message in this movie but there are some values that parents may wish to encourage including: