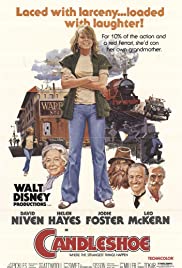 Casey Brown (Jodie Foster) is an unwanted and delinquent 15 year-old orphan who is hand-balled from one foster home to the next. Her life takes a major turn when she makes a deal with British con man Harry Bundage (Leo McKern): She agrees to go to England with him and to convince Lady St. Edmund (Helen Hayes) that she is her long-lost grand-daughter Margaret, who was kidnapped and taken to America by her father when she was four years old and was never found. Bundage has knowledge of a precious family treasure of ancient gold coins that is hidden somewhere on the St. Edmund family estate of Candleshoe, and he wants Casey to unravel the clues to find it. Casey manages to convince Lady St. Edmund and is taken in. Casey soon discovers: the kind-hearted elderly Lady has taken four other orphans into her care; the estate is on the brink of foreclosure; and it is only thanks to loyal butler Priory's (David Niven) efforts (for example by putting on different roles of servants that had to be made redundant, unbeknownst to Lady St. Edmund) that they have not been evicted. As Casey starts to feel more and more comfortable, welcomed and at home for the first time in her life, she decides to find the treasure – not to split the profit with Harry but to save Candleshoe.

In addition to the above-mentioned violent scenes, there are no further scenes in this movie that are likely to scare or disturb children under the age of five.

In addition to the above-mentioned violent scenes, there are no further scenes in this movie that are likely to scare or disturb children aged five to eight.

Candleshoe is a family adventure film from 1977, starring a teenage Jodie Foster, a brilliant David Niven, and other talented cast. Despite its datedness, the catchy story will still entertain a modern family audience, and the movie's messages remain as relevant as ever. Not suitable for children under 6 and parental guidance for 6-7 year olds is recommended due to some naughty and delinquent behaviour, as well as a couple of scary and violent scenes.

The main messages from this movie are that money isn't all that counts, and that nothing compares to the wonderful sense of belonging and feeling loved.