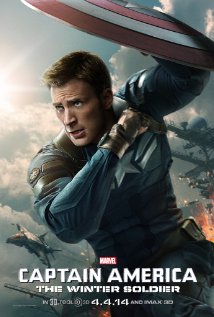 Not suitable under 13, parental guidance to 15 (Violence and scary scenes)

The film begins with S.H.I.E.L.D. agents Captain America (Chris Evans), Black Widow (Scarlett  Johansson) and a host of S.H.I.E.L.D commandos storming a hijacked ship at sea to rescue a group of hostages from modern day pirates. While Captain America rescues the hostages, Black Widow manages to infiltrate the ship’s computer system and recover data suggesting that there might be some rotten apples within the S.H.I.E.L.D. organisation.  Nick Fury (Samuel L. Jackson) the Director of S.H.I.E.L.D. brings his concerns about this to the Secretary of the World Security Council, Alexander Pierce (Robert Redford). However, Nick is then attacked and killed by the world’s most notorious assassin, The Winter Soldier (Sebastian Stan), an ex Russian black-ops cyborg.

Captain America is next to be targeted by the Winter Soldier. He is branded a rogue agent and forced to fight against the very S.H.I.E.L.D. agents with whom he once worked. In a bid to uncover those responsible for Nick Fury’s assassination, Captain America teams up with Black Widow and a new ally, The Falcon (Anthony Mackie). They uncover a sinister organisation out of the past, bent on overthrowing S.H.I.E.L.D. and ruling the world.

The film contains intense action violence, including shooting, stabbings, strangling and punching, car chases and explosions throughout. Examples include:

Children in this age group are also likely to be disturbed by the above-mentioned violence and scary characters.

None of concern in the film, but plenty of associated Marvel Comics merchandise.

Captain America: The Winter Soldier, the second instalment in the Marvel Captain America series, is a fantasy action film targeting adolescent males, adults who enjoy super hero films and fans of Marvel Comics. It is darker than many similar films and seems to contain more violent scenes than necessary for the plot. It therefore deserves the M rating, and is not recommended for under thirteen year olds. Parental guidance is recommended for slightly older teens

Values in this movie that parents may wish to reinforce with their children include friendship and trust – both of which are seen as having to be earned.