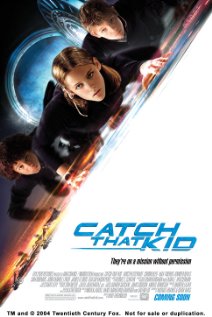 Maddy Phillips is a young girl with an adventurous spirit who loves wall climbing and longs to be like her father Tom, who used to be a climber but now runs a Go-Kart speedway for the local youths. Maddy’s mother, Molly, is head of a security firm that is installing a state of the art security system for the Harderbach bank which is run by mean spirited Mr Brisbane. Maddy’s two friends Austin and Gus are her loyal companions and together they spend a lot of time at the Go-Kart track. Gus’s older brother Chad races Go-Karts when he’s not working as a security guard at the Harderbach Bank together with megalomaniac Phil who prefers the use of savage guard dogs and the baton to high tech security.

One day Tom suddenly collapses and becomes paralysed from an injury he’d sustained during his climbing years. The distraught family is told that his only hope is experimental surgery that’s only performed in Denmark at the cost of $250,000. Molly approaches Brisbane for a loan but because the security system won’t be ready for the date he had insisted upon, he refuses. The bank manager, Mr. Hartmann, tries to intervene on Molly’s behalf but Brisbane is unmoveable.

Maddy decides to take matters into her own hands. She persuades her two friends to help her rob the bank which she insists she’ll pay back when she has the money. The threesome then come up with a bold scheme which involves Austin manipulating the electronic security system and the guard dogs, Gus fixing three ‘get away karts’ and Maddy scaling the 100 foot vault to reach the safe. Their plan seems doomed when Molly insists that Maddy baby-sits her baby brother Max on the night of the heist. Undeterred, Maddy takes Max along with her and the four children embark on a night of high suspense, danger and excitement.

There is some violence in this movie including the following:

As well as the above mentioned violent scenes there are some scary scenes in this movie including the following:

Children in this age group could be concerned by the following:

Children in this age group would probably find this movie more suspenseful than scary, however they might be disturbed by the spider being set on fire.

In one scene the bank Manager, Mr. Hartmann is being seduced by a woman at a party. He takes her into his office where Austin and Max are hiding and Austin covers Max’s eyes while Hartmann and the woman are kissing.
Phil tells Chad to “take care of his privates” after he has hit him in the groin.

There is no nudity or sexual activity except Bart Simpson showing his bottom on TV.

There is alcohol at the party.

The take home message is probably that it’s okay to rob a bank if it’s for a worthy cause.
Values parents may wish to encourage include: