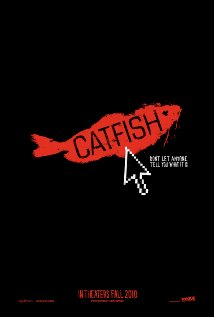 Not suitable under 13, PG to 15 (Themes; Sexual references; Coarse language)

A New York photographer, Nev Schulman, receives a painting of one of his photos from an eight-year-old artist by the name of Abby. His brother Ariel and filmmaker friend Henry decide to make a film about the child prodigy Abby who lives in Michigan with her family.

What starts as an online friendship between Abby and Nev, extends to the rest of Abby’s family and in particular, Abby’s mother Angela, and sister Megan with whom Nev begins an online and phone relationship. After eight months, Nev accidentally discovers that the song that Megan is supposed to have written and recorded was actually downloaded from another musician’s YouTube site. Nev then begins a journey to discover that Abby’s family are not what they seem.

The risks of befriending people online; living with family members with a disability.

Catfish is a documentary film best suited to older teenagers and adults. The main messages from this movie that what people say about themselves in their online profiles and communications may not always be true.

Values in this movie that parents may wish to reinforce with their children include the importance of telling the truth and how lying can get you into trouble.