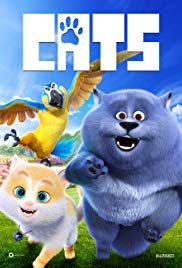 Not suitable under 7; parental guidance recommended for under 9 (animated violence and emotionally distressing themes)

House cat Blanket (voice of Hannibal Buress) is living a comfortable life in an apartment in a busy Chinese megacity. His young son Cape (voice of Max Charles), however, is bored and curious to explore the outside world. Cape has also been told that his mother has gone to a place called "Peachtopia" – a legendary place where cats live in freedom and peace. Determined to find this place and his mother, Cape escapes the apartment. Blanket, who knows about the dangers of the outside world, sets out on a desperate and dangerous journey to find his son.

Father and son relationship; ambitions in life; chasing a dream; coming of age; friendship; longing and grief; the grass is always greener on the other side of the fence; finding the place where you feel at home.