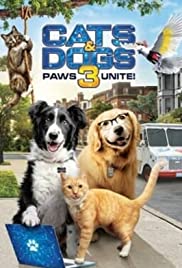 Everyone knows that cats and dogs are natural enemies, but the last decade has been the most peaceful period in pet history. This ‘Great Truce’ is no coincidence but comes down to the efforts of the secret underground organisation, ‘Furry Animal Rivalry Termination’ (FART), run jointly by cats and dogs with the aim to stop the world-wide rivalry and animosity between the two species. Gwen the house cat (voiced by Melissa Rauch) and Roger the Dog (voiced by Max Greenfield) – unbeknownst to their owners, teenagers Zoe (Sarah Giles) and Max (Callum Seagram Airlie) – work as FART monitors, overseeing that peace between cats and dogs is kept. One day, their shift takes an unexpected turn: A mysterious hacker (voiced by George Lopez) corrupts FART's online observation and communication system. His mission: sparking hatred and causing pet chaos all over the world by transmitting signals, only audible to cats and dogs, sending the world of cats and dog into chaos. Will Gwen and Roger manage to identify the villain and restore the peace?

There is some very mild violence in this movie including:

Cats and Dogs 3: Paws Unite is a stand-alone sequel to prior Cats & Dogs movies. Equipped with a mix of cute, strange, and largely funny, animated talking animals, lots of silly and potty humour, an entertaining storyline, and relatable teenage humans. With positive messages about friendship, love, and teamwork, this film is likely to provide fun and entertainment for a family audience with young children. As the violence/scariness is of an extremely mild level, parental guidance is recommended for children under 5. Children in this age group are also likely to lack the necessary attention to follow the story and may lose interest/get bored.

The main message from this movie is that all you need is love.

This movie could also give parents the opportunity to discuss with their children the importance of a sense of belonging: Pablo the cockatoo devised his evil plan out of jealousy and frustration over not being wanted and not feeling loved.