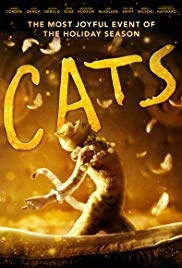 Not suitable under 6; parental guidance 6-7 (scary scenes and possible lack of interest for younger viewers)

The movie CATS is based on the stage musical of the same name, which is based on T. S. Eliot’s collection of poems called Old Possum’s Book of Practical Cats. Set in the streets of London, the movie begins when a woman unceremoniously dumps a sack containing a young cat called Victoria (Francesca Hayward) in an alleyway. There Victoria is introduced to the Jellicle Cats and, in particular, Munkustrap (Robbie Fairchild) who takes her under his wing. The cats are excited about the forthcoming Jellicle Ball where one cat is chosen to go up to Heaviside to be re-born. Old Deuteronomy (Judi Dench) has the authority to choose which cat this will be.

The Jellicle cats are tormented by Macavity (Idris Elba), a wicked cat who can perform magic and who wants to be the chosen cat. He goes to great lengths to secure his position including capturing other cats and tying them up on a barge in the Thames. Meanwhile, Victoria meets outcast Grizabella (Jennifer Hudson), a sad old cat who has nothing to live for, who takes her to meet Old Deuteronomy. When Macavity captures Old Deuteronomy, Victoria asks for the help of Mr Mistoffelees (Laurie Davidson), another magical cat, to help bring her back.

CATS is a musical movie with the famous score by Andrew Lloyd Weber, based on the stage play. It is full of a great cast of actors and it is very well done, as are the costumes and background setting. The themes are very mild but there are some scary scenes and it may lack interest for young children. It is therefore recommended for children over 7 and adults.

The main message from this movie is that redemption is always possible.