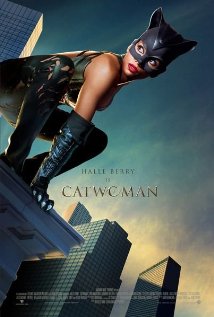 Patience Phillips is a print artist who works for Hedare Beauty. While attempting to deliver some artwork after hours Patience accidentally uncovers a dark secret relating to an anti-aging cream, and as a result Patience must run for her life from security guards. Unable to escape the guards, Patience is eventually trapped in waste pipes and flushed into the ocean where she drowns. However, she is brought back to life by an ageless Egyptian cat named Midnight. The mystical power of Midnight not only breathes new life into Patience, but also infuses her with the physical and physiological qualities of a cat. As a result, Patience is transformed onto a “Catwoman”, a superhuman able to scale vertical walls, leap from great heights and perform all manner of acrobatic acts. With her newly found abilities Patience becomes Catwoman, who, equipped with diamond claws and whip sets out to seek revenge against the Hedares.

Several subplots are inter-woven throughout the film including: a courtship between Patience and Tom Lone, a detective investigating a series of crimes linked to Catwoman; Catwoman preventing armed thieves from robbing a jewellery shop; Patience rescuing a small boy from a collapsing Ferris wheel; Catwoman being framed by Laurel Hedare for two murders including Georges Hedare; Catwoman roughing up several bad guys and tracking down those responsible for her death; and Catwoman sabotaging the release of the anti-aging cream.
Towards the final stages of the film, Tom Lone realises that Catwoman is Patience’s alter ego, and imprisons Patience for the alleged crimes committed by Catwoman. However, Patience escapes from her captivity, dons her leather cat suit and confronts Laurel Hedare for the final showdown.

Violence was used extensively throughout the film. However, while most of the violence enacted by males is presented as clumsy thuggery, Catwoman and Patience’s use of violence is highly glamorised effective and stylish. Catwoman was never outmatched with the only serious challenge being provided by the film’s female villain Laurel Hedare.

At times the use of violence was presented in an almost slapstick manner.

Other acts of violence included:

Verbal violence was also used throughout the film, in the form of hurtful sarcastic putdowns by Georges Hedare, directed specifically at women.

With the exception of deaths related to the film’s plot, there were few real life consequences associated with the use of violence, and almost no displays of blood and gore. For example, when Catwoman threw a bad guy through a nightclub wall, the man was able to walk away without any apparent injuries. Catwoman’s foes were able to take severe beatings and continue fighting without any sign of physical injury. While Laurel Hedare is simply impervious to pain or injury; her use of the toxic anti-aging cream has turned her skin to marble.

The film displayed a few bloody gunshot wounds, the most graphic being the display of Georges Hedare’s dead body, which was riddled with bloody bullet holes and claw marks.

The film’s two leading women enacted most of the violence. However, the violence (verbal, physical and psychological) enacted by Georges Hedare against his wife and girlfriend was darker and nastier.

As well as the violent scenes mentioned above, children under the age of 5 could be scared by the following:

The above scenes could also disturb children between the ages of eight and thirteen years. However, older children in this age range are better equipped to distinguish appearance from reality, and therefore have a greater chance of interpreting the visual images and violence as unrealistic.

In general children over the age of thirteen should not be scared by visual images of Catwoman. However, the violent visual images may still adversely affect some children in this age bracket. The scenes involving violence enacted by Georges Hedare against women are presented in a more realistic manner and could have a negative impact on children of this age, as they are developing their attitudes towards their own gender roles and the opposite sex.

There are several sexual references made throughout the movie. A number of these are made by Patience’s friend Sally in reference to Patience dating of the detective Tom Lone, suggesting that she ‘go for it’.
Laurel Hedare makes a number of sarcastic remarks in relation to her husband’s infidelity and seduction of younger women, e.g ‘careful George—she’s not old enough to drink.

Although there is no nudity in the movie, Catwoman is clad in a backless tight fitting black leather costume that accentuates her upper torso. Catwoman’s scantly clad body is featured throughout the movie.

The film displays one bedroom scene inferring sexual activity between Patience and Tom Lone. No images of sexual activity are presented, there is a kiss on the lips, images of Tom Lone’s naked upper torso and Patience is clothed in pyjamas. The morning after scene provides Tom Lone with greater insight into Patience’s dual personality.

The film contained two short scenes, one at a party and another in a nightclub, with people drinking alcohol. While in the nightclub Catwoman orders a Black Russian minus the alcohol leaving her with a glass of cream.

There was no coarse language used in the movie.

There is no simple take-home message in Catwoman. There is no obviously good hero or heroine as the dual character of Patience and Catwoman is presented as both good and bad, weak and strong, submissive and dominating. It portrays women in the office as the submissive underdogs ruled by their superior male employers with the only male office worker presented as camp.