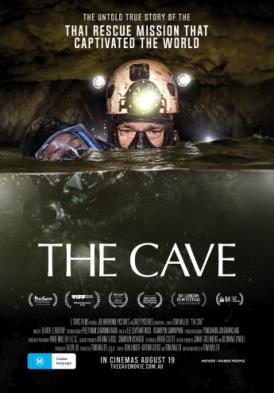 Not suitable under 11; parental guidance to 14 (language, themes)

One afternoon in Northern Thailand, a football coach takes his team of 12 boys to their favourite hangout at the Tham Luang cave. While inside, a sudden downpour begins to flood the cave and the boys become trapped. Unable to get out, they retreat further into the cavernous depths, trying to escape the rising waters. Huddled in a little pocket 3 miles from the entrance, the boys sit in pitch darkness, catching water droplets on their tongue, waiting for the flood to recede and talking about what they will do when they finally get home. Meanwhile, outside the cave’s entrance, authorities are setting up a rescue centre to try to drain the cave and reach the boys. Local farmers and families drop everything they are doing to come and help and, as the news broadcasts the story nationally, more individuals come forth with skills and services in the hopes of assisting the rescue efforts; yet even those with the best of intentions must battle red tape and bureaucracy. When a specially trained Thai Navy Seal dies attempting to reach the boys, the complexity and seriousness of the situation really hits home. As would-be rescuers battle time and torrential rains, professional cave divers from around the world begin to come forward. These men form a team to do what they are told cannot be done. While the world waits with baited breath, these men will risk everything in a final, desperate effort to reach the boys and bring them back alive.

Children separated from parents; Sacrificing a life to save someone else; The powerful and sometimes destructive forces of nature; Political bureaucracy.

The Cave is a largely subtitled documentary detailing the extraordinary story of heroism and sacrifice that captivated the world and launched a global effort to accomplish the impossible. The film highlights the selflessness of ordinary Thai people whose livelihoods were destroyed by the rescue efforts; who gave everything they had; and who refused to accept any compensation in return. Likewise, the film introduces the heroes who risked their own lives to save the young football team trapped behind a wall of water three miles beneath a mountain.

The main messages from this movie are to have faith; to believe in the impossible; and to believe in each other. Also, that miracles can happen when humanity unites to achieve a common goal.