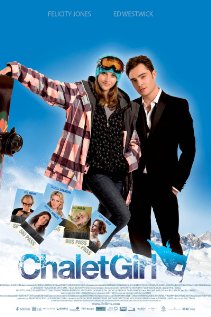 Not recommended under 13, PG 13 to 15 (Sexual references; Coarse language; Substance use)

Kim Matthews (Felicity Jones) had just won a huge skateboarding competition when a tragic accident led to the death of her mother. Since that tragedy, she has never skateboarded again. Two years on, Kim is working in a fast food outlet, caring for her helpless father (Bill Bayley). Upon hearing of a better paying job, she finds herself on her way to Austria to work as a ‘Chalet Girl’; keeping house for the Madsen family in their ski chalet.

Kim now has to cope with being away from her father as well as attempting to fit in to what is a totally different way of life. Jonny Madsen (Ed Wetswick), the son of Dickie (Bill Nighy) and Caroline (Brooke Shields) helps to accustom Kim to the ways of the wealthy, including drinking £500 bottles of champagne and helicopter trips to the top of the mountain.

In her downtime, Kim tries snowboarding. Crazy Finn, Mikki (Ken Duken) helps her learn the basics and to their surprise, shows that she is a natural! Mikki encourages her to aim to participate in an upcoming snowboarding competition to win $25,000. Kim trains hard but struggles to overcome the flashbacks of the car accident that killed her mother, when she attempts jumps.

Chalet Girl is a fun story for older adolescents showcasing some amazing snowboarding and Austrian scenery. Parents should be aware that the sexual references, coarse language and alcohol abuse make it unsuitable for children and younger teens.

Overcoming tragedy – Kim and her father have just “existed” since the death of their mother and father. Kim has avoided doing the one thing that she loved – skateboarding. Taking the job in Austria, she was able to find something that she equally loved and by admitting to her grief, was able to excel and achieve to the best she could.

Money doesn’t make a perfect life – Despite having riches and experiences of which most people can only dream, Jonny is not happy. The expectation that he will marry an ‘appropriate person’ and take over the family business meant that he has had to forgo his passion, music, and potentially, true love.