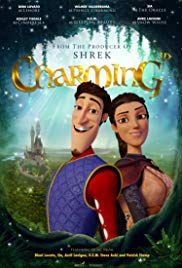 Parental guidance recommended under 6 due to violence and scary scenes. OK for 6 and up but is likely to lack interest for older children.

When Prince Philippe Charming (voiced by Wilmer Valderrama) is born, he is cursed by a vengeful dark fairy, Nemeny Neverwish (voiced by Nia Vardalos), to be so charming that every woman who sees him falls desperately in love.  If he can’t find true love’s kiss by his 21st birthday, all love will disappear from the kingdom.

In the lead up to Prince Charming’s birthday, while he attempts to work out which princess to marry – Cinderella (voiced by Ashley Tisdale), Sleeping Beauty (voiced by G.E.M), or Snow White (voiced by Avril Lavigne) – he runs into escaping treasure thief, Lenore (voiced by Demi Lovato), who appears unaffected by his charms.  After being caught, Lenore strikes a deal with the guardians of the three princesses, to help the prince survive the ‘gauntlet’ of tasks he must complete to prove his love for them.  As they journey together, Lenore, in disguise as ‘Lenny,’ realises that she is falling in love with the prince.  In order to break the curse however, they must confess their love for each other before it’s too late. This is made all the more difficult by the increasing meddling by Nemeny Neverwish.

Prince Charming kisses many women on the lips

A portrait of Prince Charming is visible, in which he has been painted in the style of The Birth of Venus

Charming is an animated children’s film that aims to tell a traditional fairytale with a twist.  This film is suitable for children under 8, but will not interest most children above this age group due to its contrived plot,  and generally flat comedic moments.  In addition, the film has regular ‘freeze-frames’ in which the prince interjects with internal monologue that slows the plot. There are also regular musical interludes from various characters. These are pop-songs without particularly catchy melodies, which are unlikely to appeal to children.