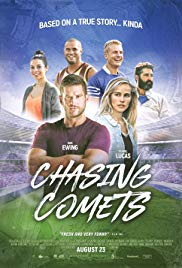 Not recommended for children under 13 and parental guidance recommended to 15, due to adult themes, sexual references and coarse language.

This is a semi-autobiographical film written by retired rugby league player Jason Stevens. The film is set in the town of Wagga Wagga in New South Wales and tells the story of young NRL champion Chase Daylight (Dan Ewing) navigating the macho footy lifestyle and finding his way towards the Christian faith. Chase lives with his mum in Wagga and plays for the local rugby team, the Comets, who are not doing too well. His best mate, Rhys (Stan Walker) plays AFL, but together they like to party hard.

When Chase realises that his party lifestyle might be affecting not only his game, but also his relationship with girlfriend Brooke (Isabel Lucas), he starts reflecting on his priorities. An encounter with the local reverend (George Houvardas), a man who understands from personal experience some of Chase’s troubles, sets Chase on the path to finding faith. Despite temptations and challenges along the way, Chase must try to turn his life around.

Apart from the violent scene described above, there are no scenes in this film that would disturb or scare children in this age group.

Children in this age group may also have some questions regarding the sexual references or the religious themes.

Chasing Comets is a warm-hearted movie that tries to tackle some of the common issues that young men, especially those involved in sports clubs, might experience. One, in particular, is the temptation to have meaningless sexual encounters and shallow relationships with women. The movie has a very strong moral plotline that encourages young people to wait until they are married to have sex, without being too evangelical or condemning of those who don’t choose that path. The film is aimed at teens and young adults and younger children may find it a little boring. It is not recommended for under 13s because of themes and sexual references.

The main messages from this movie are that young people should wait until they are married before they have sex, and that belief and faith in Christianity can help you make the right choices in life.

Values in this movie that parents may wish to reinforce with their children include the importance of meaningful and respectful relationships between men and women.