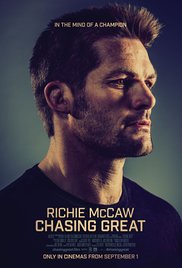 Not recommended under 10; parental guidance 10 to 12, due to scenes of sports violence and injury, and lack of interest for young viewers

Chasing Great is a biographical documentary that tells the story of the rise to fame of New Zealand’s All Black rugby captain Richie McCaw. At the age of 34 Richie decided to retire at the end of the 2015 season, but wanted to go out with a bang by winning back-to-back World Cups, a feat that no team or captain had every achieved.

The documentary follows Richie through his final season as captain of the All Blacks, as well as providing a personal insight into Richie’s private life from growing up on a small town farm in New Zealand surrounded by family, then being sent to boarding school, winning a place on the All Blacks team, and finally becoming their captain.

The film provides anecdotes and reflections from family, friends and past coaches as well as depicting Richie’s struggle to cope with World Cup losses and how his response to personal failure made him stronger.

In one scene we hear Richie talking about the loneliness of boarding school and wanting to go home.

Nothing of further concern

Chasing Great is an insightful documentary about an individual’s drive to succeed, and the personal challenges and pressures he had to overcome in order to be the captain of the All Blacks Rugby Team.

The film is full of positive life messages for everyone, not just sports players and fans. Rugby fans of all ages are likely to find the film entertaining and interesting but the film is likely to lack interest for younger children who may also be upset by the scenes of injury on the rugby field. It is therefore not recommended for children under 10, with parental guidance recommended for the 10 to 13 age group.