Cheaper by the Dozen 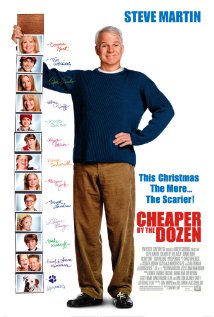 Tom and Kate Baker were childhood sweethearts who met at college, married and went on to have an unusually large family of twelve children. They are living quite happily, if somewhat chaotically, in their middle class lifestyle when Tom is invited to Chicago to coach the Stallions. The Stallions were his old football team and the job offer is Tom’s dream come true; however he has great difficulty persuading the children that the move will be a good one. Kate is very supportive of Tom as she knows what the job means to him but Tom has to promise the family that they will be a much happier and stronger family in their new home. Charlie, the oldest boy, is particularly unhappy about leaving his girlfriend behind.

The Bakers move into their new house which is in a fairly upmarket neighbourhood much to the disgust of their new neighbours. Not long after arriving Kate is given the news that her book “Cheaper by the Dozen” is to be published and she needs to go to New York for a few days. Never having left the children before, Kate is reluctant to leave Tom on his own. However Tom insists that he will be able to manage and sends her off with his blessing. Tom tells the children that while Mum’s away the kids can play, however he’s unprepared for the total chaos that reigns which makes for all kinds of amusing events. The few days turn into two weeks and Tom has increasing difficulty managing his family and giving the commitment to his career that’s required of him. This gives Tom the opportunity to asses what’s really important to him. The crunch comes when Kate decides to come home early and invites the crew from Oprah to film her “one big happy family” who are not particularly happy on that day.

There is a lot of comic violence done for laughs, including the following:

There is not a lot of scary material in this movie except for the following:

Some children in this age group might still be scared by the dog attack.

There is nothing that would scare children in this age group.

There are quite a few sexual references in this movie:

There is no nudity but Hank and Nora kiss seductively in front of Nora’s parents.

There is drinking of alcohol at a wedding.

There is a little coarse language, mainly name calling such as:

The take home message is that two parents having careers and raising a large family doesn’t work.