Cheerful weather for the wedding 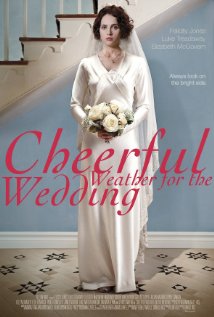 Not recommended under 12 (Themes; Lack of interest), Parental guidance recommended 12 to 14 (Themes)

Taking place at a large country house in Devon in the 1930s, Cheerful Weather for a Wedding centres on the difficult decision faced by a young woman on her wedding day. Romantic and spirited Dolly Thatcham (Felicity Jones) is preparing to marry the kind but dull Owen Bigham (James Norton). However, as she hides upstairs drinking rum in an effort to calm her nerves, she struggles to forget a summer fling she had with the handsome Joseph Patten (Luke Treadaway).

Meanwhile, Joseph lurks downstairs, trying to find a way of seeing Dolly in an effort to explain how he truly feels and that he still loves her. Dolly’s mother (Elizabeth McGovern) shows her disdain for Joseph at every possible turn, and tries to prevent him from seeing the bride. When the two finally meet just before Dolly leaves with her husband, Joseph asks her to run way with him and Dolly now has a final decision to make.

Young children may be disturbed by a scene where a dead bird is seen having its head cut off in the kitchen, during dinner preparations

There was limited sexual activity in this movie, including:

Cheerful weather for the wedding is a quintessentially British film dealing with questions of love, obligation and sacrifice. It presents a young woman’s struggle to decide between the man she previously loved and who broke her heart, and her safe and financially stable fiancé for whom she feels very little passion. The film demonstrates that this is not an easy decision to make. It suggests that following her heart and choosing her ex-partner would be an ultimately foolish act. However, at the same time, the film depicts the importance of not running away from one’s problems. Dolly has rushed into a marriage in an effort to deal with both a broken heart and a pregnancy. As a result, she is dealing with the consequences of her actions, just as she will need to deal with the consequences of her choice between the two men in her life.

Although there is little in this film to disturb young children, its theme makes it more suitable for teenagers and adults, and it lacks interest for under 12s.

Issues arising from the film that parents may wish to discuss with older children include: