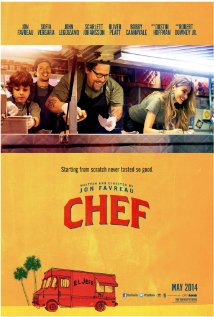 Not recommended under 15; parental guidance to 15 (coarse language; adult themes)

Chef is an American comedy about workaholic chef Carl Casper (Jon Favreau) who is fired from his job in Los Angeles. Carl has worked in restaurants for years but his passionate dedication and strong work ethic caused him to negect his relationship with his son Percy (Emjay Anthony), as well as his marriage to now ex-wife Inez (Sofia Vergara).

After being fired, Carl is forced to reassess his main concerns in life and decides to start a mobile food service with home-style cooking. Inez’s ex-husband Marvin (Robert Downey Jr) offers Carl an old used truck, which Carl and his son work together to renovate. Once completed, the two join forces with Martin (John Legizamo)and the three begin a road-trip journey across the United States, with Percy updating various social media websites in order to advertise the travelling truck named ‘El Jefe Cubanos’.

There is a significant level of product placement within the film, including:

There are several sexual references within the film, including:

There is considerable use of coarse language in the film, including:

Chef is the story of one man’s journey as he discovers more about his family, his life, and what he is capable of achieving. The film promotes the idea of taking chances, even when the odds are stacked against you. It also speaks about the nature of parenting, and how crucial it is for parents to develop a quality relationship with their children as opposed to prioritising aspects of their life that may be temporary or less significant in the long-term.

Children may be attracted to the film because of an interest in cooking (and TV shows about cooking) but parents are warned that the film deserves its M rating for frequent, and quite strong, coarse language and the themes and story make it more suitable for an adult audience.