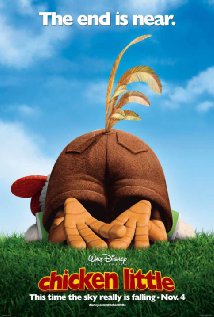 When Chicken Little (Zach Braff) raises an emergency call that the sky is falling, panic erupts all over town. When questioned, what Chicken Little believed was a piece of the sky can’t be found. He is labelled as “crazy”, ostracised by the community and, to a certain extent, his own family. Eventually he wins back the approval of society, and his father (Gary Marshall), but just when life is looking sweet … a piece of the sky falls on him again.

The piece of sky turns out to be a piece of an alien spaceship, and when he and his friends Abby (Joan Cusack), Runt (Steve Zahn) and Fish (Dan Molina) investigate, Fish accidentally winds up back on board the spaceship. When his friends attempt to rescue him, they become the prey of two enraged aliens who believe the group have abducted their child. When their attempts at hunting down Chicken Little and his friends fail, an all out alien invasion of planet earth is launched and it is up to an unlikely hero to save the day.

The film contains frequent use of violence. Being a cartoon, both the violence and the (occasional) consequences are often very unrealistic. Violent scenes include:

In addition to the above mentioned violent scenes, there are some scary scenes in this movie, including the following:

Children in this age group may be scared or disturbed by the scenes mentioned above.

Some children in this age bracket could be concerned by some of the above mentioned scenes.

It is unlikely that children in this age group will be frightened by any scenes in this film.

There is one sexual reference in the movie, when Abbey and Runt sing the karaoke version of “If you want to be my lover…”

While the film contains no coarse language, there is a fair amount of name-calling, for example Abbey is repeatedly referred to as ‘Ugly’ and Chicken Little as ‘Loser’.

The movie’s main message is to believe in yourself and to hold onto the truth no matter how crazy or unrealistic it may seem. The movie could provide parents with the opportunity to discuss the importance of communication and trust in relationships, and the possible consequences when one or both are lacking.