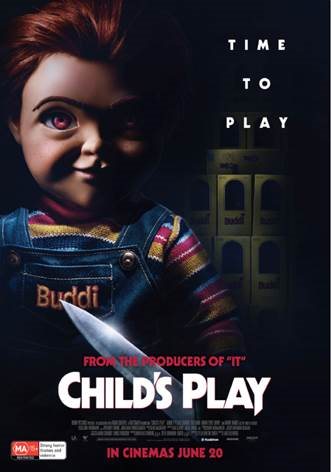 A Vietnamese factory worker is belittled, humiliated and fired but not before, in a last act of defiance, he removes all the safety settings on the Buddi doll he is building. Meanwhile in the United States a lonely kid named Andy (Gabriel Bateman) has just moved into a new neighbourhood and is having trouble making friends. When a defective Buddi doll is returned to the store where Andy’s mum Karen (Aubrey Plaza) works she brings it home for her son. At first Andy isn’t impressed but the doll, self-named Chucky (voiced by Mark Hamill), keeps trying to show that he cares for Andy and a friendship of sorts is born. When the other kids see how unique Chucky is and how he is capable of learning whatever they teach him, no matter how inappropriate it may be, Andy finds himself with real friends Pug (Ty Consiglio) and Falyn (Beatrice Kitsos) who are there to help Andy when the killings begin. Together they hide the evidence of what is happening and try to destroy Chucky before he can kill everyone that Andy cares about.

Consumerism, fears of social isolation, the complexities of friendship, the battle of good vs. evil.

Many of the above mentioned scenes could also frighten children over the age of thirteen.

Child’s Play is a horror film. A remake of the 1980’s slasher movie bearing the same name this latest version stands on its own. It is fast paced, the characters are well developed and while it will appeal to Chucky fans or those who love horror movies this is not a film for children or young teens.

The main messages from this movie are that true friendship and human interaction are important and cannot be made or replaced by robotics, that violence is easily learned and perpetrated and that ultimately good will triumph over evil.