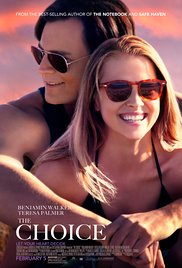 Based on the Nicholas Sparks novel, The Choice is a romantic drama following the story of Travis (Benjamin Walker) and Gabby (Teresa Palmer). Travis is a kind-hearted womaniser from North Carolina, who becomes immediately infatuated when an attractive medical student named Gabby moves into the house next door. Travis frequently throws loud and alcohol-driven parties despite his studious neighbour’s protests so the two initially clash and have many arguments.

Eventually, however, Gabby comes to realise that Travis is indeed a very decent man. He is a veterinarian with a love for animals and, having a dog of her own, Gabby finds herself drawn to him. When Gabby’s current boyfriend leaves town to travel to a medical conference, she and Travis become involved in an affair.

In time the couple marry, but tragedy strikes when a car crash puts Gabby in a coma and Travis has a heart-breaking decision to make.

Love and relationships; injury and death – in particular, switching off a person’s life support; grief and loss

In addition to the above-mentioned violent scenes and scary visual images, there are some scenes in this movie that could scare or disturb children aged under eight, including the following:

Younger children in this age group may also be disturbed by the decision about whether to turn off Gabby's life-support.

The Choice is a touching film about love, grief and loss. The movie highlights the complex nature of relationships, and the manner in which relationships can change in unexpected ways. The nature of choice and consequence is also explored as the characters make life-altering decisions that affect not only themselves.

The film’s themes, particularly that of switching off a person’s life support, make it quite intense for a PG-rated film and more suited to older viewers. It is therefore not recommended for children under 12, with parental guidance strongly recommended for 12 to 14 year olds.

Parents may wish to discuss with their children: