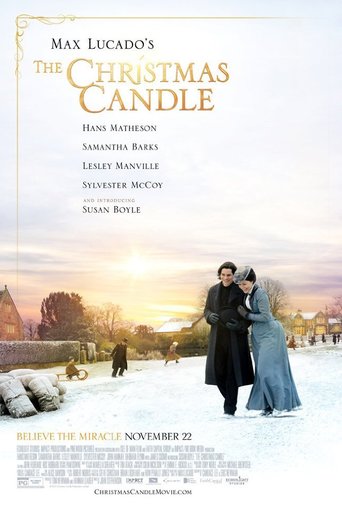 The legend goes that many years ago in the downtrodden village of Gladbury, a humble candle maker prayed for a miracle to improve the lives of all of the villagers. As the candle maker wasn’t praying for himself, an angel appeared and touched one of his candles until it glowed brightly. From that day on life in Gladbury greatly improved and the villagers were happy. Thereafter, every 25 years, the angel appeared on Christmas Eve and touched a candle, providing a miracle to the one who lit it.

When a new young minister arrives in Gladbury, he declares the belief in miracles to be highly superstitious. Having lost his wife and daughter to TB, the Reverend David Richmond (Hans Matheson) believes that miracles only occur through the good works of men. He therefore brings the village folk together and encourages them to do go deeds for their neighbours.  It is also the dawn of the age of electricity so David sees this as the future for Gladbury and wants to do away with all the candles. The Gladbury Angel, however, has different ideas.

Fantasy and superstition; death of family members; Christmas as a Christian festival

Ruth is a single mother which is quite a stigma in the 19th century.

The Christmas Candle is a family movie about the magic of Christmas. It’s a very gentle movie but there are some tense moments which will require parental guidance for young children. The movie emphasises the Christian belief in Christmas as a religious festival in the Christian calendar.

The main messages from this movie are that faith and good works are not mutually exclusive and that miracles can happen if you believe strongly enough.