Christmas with the Kranks 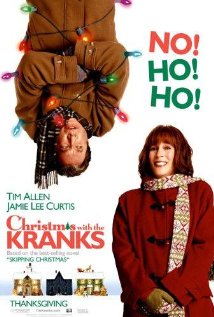 Luther and Nora Krank tearfully farewell their daughter Blair who has joined the Peace Corps and will be away for Christmas. The thought of having Christmas without her is so depressing that Luther decides to skip Christmas, save the $6000 he normally spends and go away on a Caribbean cruise instead. He has to persuade his wife not to put up a Christmas tree, send any cards or have any parties. Nora reluctantly agrees but the neighbours get very upset when the Kranks don’t decorate their house with lights or put Frosty the Snowman up on the roof. Bad feelings are further fuelled when Luther refuses to acknowledge the Carol Singers or give to the annual Police Charity.

Then they get a phone call from Blair saying she will be home for Christmas after all and is bringing her new boyfriend/fiancé Enrique. This sends Nora into a flat panic and Christmas in now fully back on the agenda with some funny results.

There is some comic violence in this movie:

Children in this age group might be scared by the above mentioned scenes; however they are mostly done in a comic context.

Some younger children in this age group might be scared by the above mentioned scenes; however they are mostly done in a comic context.

Nora complains that she only has sex once a week on a Saturday night.

There is no nudity but Nora Krank appears in a very brief bikini.

There is drinking of alcohol—at home, in a hotel, at a party.

The message of this movie is that Christmas is about family and friends.

Parents could take the opportunity to discuss with their children what their own family’s values are in respect of: