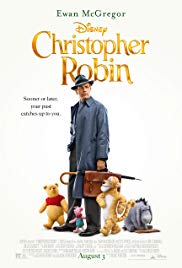 Not recommended under 5, parental guidance recommended to 7 due to a brief war scene and some other scary scenes

Christopher Robin (Orton O’Brien) sadly says goodbye to his Hundred Acre Wood friends when he is sent to boarding school.

As an adult, Christopher (Ewan McGregor) meets and marries Evelyn (Hayley Atwell). He  has to leave, however, to fight in the war and doesn’t get to meet his daughter Madeline (Bronte Carmichael) till some years later. When he returns home, he starts to work for the Winslow Luggage Company. The economy is very poor after the war and Winslows are looking at any ways to save money. Christopher Robin is overcome by the pressures of work and finds little time to spend with his family. While pondering the ways of cutting costs, Christopher unexpectedly meets his old friend Winnie the Pooh (voice of Jim Cummings) in a London park.

Christopher Robin can’t understand how Winnie the Pooh found his way to London but realises he must take him back to the Hundred Acre Wood. There he finds the woods rather desolate and all of his old friends are nowhere to be seen. He eventually finds them hiding from the heffalumps. Christopher Robin has to save them from their fears and at the same time saves himself from the dull person he has become.

Christopher Robin is a Disney family movie but with some brief scary scenes. The mixture of real life and animated animals is quite realistic and children will love to see their favourite book animals come to life. Older children who are not familiar with the animal characters may not be interested, but many adults may enjoy it for its nostalgia value. Winnie the Pooh is the hero in this movie who, having been looked after and rescued many times by Christopher Robin when he was young, now comes to rescue Christopher Robin. It is quite a gentle film but there are some scenes which make it unsuitable for the very young.

The main messages from this movie are that it’s important to make time for those you love and that although work is necessary, it shouldn’t take a priority over family.