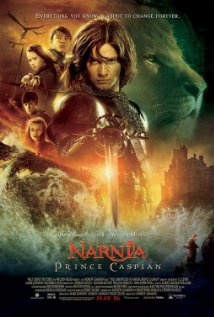 Not recommended under 13, Parental guidance to 15 due to frequent violence and scary scenes.

Based on the book by CS Lewis, Prince Caspian begins when Peter (William Moseley), Susan (Anna Popplewell), Edmund (Skander Keynes) and Lucy (Georgie Henley) Pevensie are called back to Narnia. While only a year has passed for them, in Narnia hundreds of years have elapsed and nothing is as it was. Their castle lies in ruins, Aslan is gone and the Telmarines, a violent community, have invaded Narnia, hunting the Narnians to the brink of extinction.

Leading the Telmarines is Prince Caspian’s evil uncle Miraz (Sergio Castellitto) who will do anything to be King. When his wife finally delivers a baby boy Miraz tries to kill Caspian (Ben Barnes), the rightful heir to the Telmarine throne.

Caspian escapes into the forest where he is rescued by a Narnian, only to learn that the rest of the Narnians want him dead. In a desperate bid to save himself he proposes that they combine his knowledge with their forces to bring Miraz down. Before the attack Caspian and the Narnian army meet up with the Pevensie children who are being led by Trumpkin (Peter Dinklage) a red dwarf whom they have saved from Miraz’s men.

Peter, as High King, and Prince Caspian do not agree on how the army should be lead, or on the methods used for attacking their enemies. Only after devastating and tragic losses are they able to work together to help save Narnia, but ultimately it is Lucy’s loyalty to Aslan that conquers the forces of evil and wins them the ultimate victory.

Children in this age group may also be disturbed by many of the violent and disturbing scenes described above.

Children in this age group may also be disturbed by some of the scenes described above, particularly those involving realistic harm.

Prince Caspian is a fantasy film featuring beautiful scenery and some outstanding special effects. Due to the frequency and nature of the violent content, this is not a family film, but one geared toward an older, more mature audience.

The main messages from this movie are to fight for what is right, for ultimately good will triumph over evil, and that bravery and courage come in many different forms.