Chronicles of Narnia: The Lion, the Witch and the Wardrobe 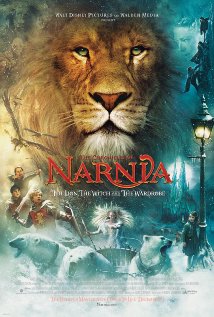 The four Pevensie children, Peter (William Moseley), Susan (Anna Popplewell), Edmund (Skendar Keynes) and Lucy (Georgie Henley) are evacuated from London during the blitz in World War II and sent to stay with a mysterious professor in a large house in the country. One day the children are playing hide and seek when Lucy discovers a large wardrobe, a perfect place to hide! But when she enters it she finds herself in the frozen, beautiful land of Narnia. There she meets Mr. Tumnus (James McAvoy), a faun with a man’s face and horse’s feet, who befriends her and takes her back to his home for tea.

However Tumnus is supposed to kidnap Lucy and hand her over to the Wicked White Witch who has bewitched Narnia, leaving it in a state of perpetual winter for the past 100 years, turning many of its occupants to ice. The White Witch fears an old prophecy which states that four human children will come to the land and overturn her rule, thus has decreed that any human being must be captured. However Tumnus is too good to turn Lucy in, and helps her escape back to her family. There the other children don’t believe her tale, until the rest of the children also have to hide in the wardrobe one day, and discover Narnia for themselves.

They become reluctant heroes, taking on the mantle of the prophesied children, and meet Aslan, (voiced by Liam Neeson) the real lion King of Narnia. They join him and the other forces of good in the battle to save Narnia and overcome the White Witch.

The supernatural; self sacrifice; ritual killing

Although there is no blood or gore shown, there is a high level of fantasy violence in this movie, including the following:

In addition to the above mentioned violent scenes, there are several scary and potentially upsetting scenes in this movie including the following:

Children over the age of thirteen could still find some scenes upsetting, such as the realistic physical harm, the threats to the children and the death of Aslan.

The Chronicles of Narnia: The Lion, the Witch and the Wardrobe is a good versus evil battle in which good finally triumphs.

This movie could give parents the opportunity to discuss with their children some aspects, such as: