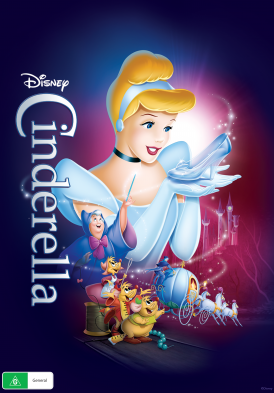 After losing both her parents at a young age, Cinderella (voiced by Ilene Woods) is left to live with her mean stepmother (voiced by Eleanor Audley) and her spoilt and nasty stepsisters Drizella (voiced by Rhoda Williams) and Anastasia (voiced by Lucille Bliss). Jealous of Cinderella's grace and beauty, her stepmother degrades Cinderella to work as a scullery maid in their family chateau. Despite the cruel and unfair treatment, Cinderella has managed to stay kind and patient, and is positive that one day her dreams will come true. With the help of her animal friends and her Fairy Godmother (voiced by Verna Felton), Cinderella meets Prince Charming (voiced by William Phipps/Mike Douglas) at a Royal Ball, but before long she has to rush away, because the spell ends at midnight, and her beautiful gown will turn back into rags. All the Prince is left with is one of her glass slippers, and he declares that he will marry the girl whose foot fits that slipper.

There is some violence and emotional cruelty in this movie including:

To this day, Disney's 1950 Cinderella remains one of the most iconic depictions of this classic fairy-tale princess story of all times. Featuring a mix of endearing, funny, likeable, as well as despicable characters, brought to life in gorgeously detailed animations, beautiful memorable songs, and a great amount of humour makes this film a great and timeless pick for families, and especially fans of princess/fairy-tale stories. While Cinderella's wish for a happy end comes true, young and/or sensitive viewers might get upset at the unwarranted emotional cruelty the stepmother and stepsister are displaying against Cinderella, especially if the concept of losing biological parents or blended family is personally relevant. In these instances, parental guidance is recommended.

The main messages from this movie are that you should not get bitter over disappointments, but stay patient and never give up hope that one day your wishes will come true.