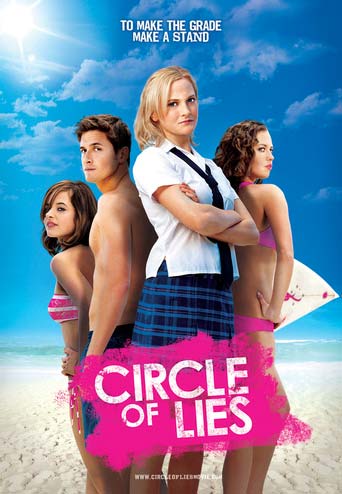 Circle of Lies is an Australian-made drama that tackles issues such as high school popularity, bullying and sexual assault. On the first day of a new school year, Denise Dixon (Hilary Caitens) – once the most popular girl in the school – is back. Her former best friend Kirsty (Anna Lawrence) now dominates Short Beach High, and she’s on a mission to destroy Denise and any semblance of a reputation she has left. Kirsty has told the entire school details of Denise’s apparent sexual exploits, stolen her ex-boyfriend Aiden (Ryan Harrison) and continues to take every available opportunity to use the rumour-mill for her own gain.

Although almost every one of her peers turns on Denise, her old friends Linda (Karina Banno) and Greg (Luke Webb) never doubt her innocence. Gradually, Aiden also comes to see the truth of the situation, and recognises Kirsty for what she really is – a manipulative liar. With her friends standing by her, Denise is able to find the strength to defend herself publically against the outrageous lies Kirsty has spread, gradually becoming a more confident and self-assured person as a result.

Much of the film's content with strong themes, and scenes of bullying and sexual assault is likely to disturb children under 15 and is not suitable for this age group.

There are a significant number of sexual references in this movie, including:

There is a significant amount of coarse language in the film, including:

Circle of Lies is a powerful film that speaks to the nature of friendship, trust and betrayal. It highlights the pervasive consequences that a single action may have, as well as the dangerous slope of power and popularity on which teenagers and young adults may find themselves. The film demonstrates the importance of taking a stand, and having the strength to defend yourself or what you believe in. It also highlights the fact that situations are often far more complex than many people realise, and that third-party reports of events can be incredibly misrepresentative of reality.

The MA15+ rating is well deserved as the film’s content is unsuitable for under 15s and teenagers over 15 would benefit from adult guidance due to the strong themes. It would make a very good discussion starter for parents who wish to tackle these themes with older children, or for senior school classes.

Parents and teachers who watch this movie with teenagers could discuss: