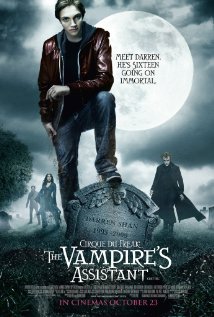 Not suitable under 8, Not recommended 8-12, PG to 14 (Violence, Disturbing scenes and themes)

Crepsley has a giant poisonous performing spider called Madame Octa and following the show, Darren, who has a passion for spiders, decides to go backstage and “borrow” Madame Octa. While Darren is in the process of taking the spider, he overhears Steve ask Crepsley to turn him (Steve) into a vampire and Crepsley refuse.

Darren manages to abscond with the spider which he takes to school the next day. Unfortunately it manages to escape from Darren’s locker and bites Steve who ends up in hospital in a coma. In an attempt to make amends for his misdeeds, Darren goes back to Cirque du Freak seeking an antidote from Crepsley. In return for the antidote, Darren must agree to becoming Crepsley’s assistant, which involves Darren being turned into a half vampire. Following Daren’s transformation, Crepsley administers the antidote to Steve, who promptly recovers. However, when Steve learns that Darren has been turned into a half vampire he becomes enraged with jealousy and vows revenge.

While the violence presented in this film is at times quite brutal, much of it is depicted in comic book format with little or no blood and gore. The majority of the action violence is confined to three major fight scenes. Examples include:

Children in this age group are also very likely to be disturbed by the above-mentioned scenes.

The film contains some coarse language, put downs and name calling. Examples include:

Cirque du Freak: The Vampires Assistant, based upon a series of books, is a supernatural vampire thriller suited to an older adolescent audience and containing numerous scenes and images capable of disturbing younger children.

The main message from this movie is that “It’s not what you are that matters; it’s who you are”. It doesn’t matter whether you are seen as a freak or otherwise; what matters is how you behave and how you treat others.