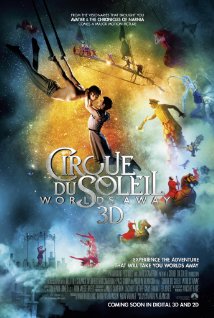 Not recommended under 5, PG to 8 (Scary scenes; Lack of dialogue)

There is no dialogue in this movie which is a performance by the well-known performing group, Cirque du Soleil. The movie starts with a young woman visiting a travelling circus where she is persuaded by a silent clown to watch the aerialist, the main attraction of the show. She is captivated by the young man but he is distracted by her and misses a catch. He falls to the ground and she runs to help him. They are both swallowed by the ground.

The girl finds herself in another world of clouds and big tops. She goes from one to another in search of the young man. Her efforts to find him are thwarted everywhere she goes but she does get to watch the different performances by the amazing Cirque du Soleil artists as she goes along.

There is some stylised violence performed in dance, including:

In addition some of the circus acts involve self harm including:

Cirque du Soleil: Worlds away 3D is a visual treat to watch but some of the imagery and the situations in which the young woman finds herself could be quite frightening for young children, particularly in 3D. Also the lack of dialogue may make the story hard for young children to follow, so they may need help with this. The film is therefore more suited to children over 8.