City of Your Final Destination 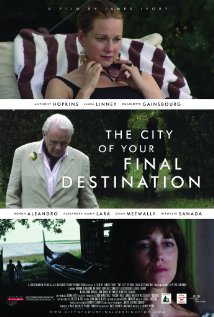 Not recommended under 12, PG to 15 due to themes and sexual references

Omar Razaghi (Omar Metwally) is a Kansas University doctoral student who has a grant to write the biography of Jules Gund - a Latin American author of some fame who committed suicide. Omar’s academic and financial future depend on him writing the biography, but the executors of Gund’s estate, his brother Adam (Anthony Hopkins), widow Caroline (Laura Linney) and mistress Arden Langdon (Charlotte Gainsbourg) have refused permission.

Urged on by his strong willed girlfriend Deirdre (Alexandra Maria Lara), Omar travels to Gund’s large but dilapidated estate in Uruguay in hope of convincing the executors to change their minds. Once in Uruguay, he encounters unexpected adventures and life changing events.

Relationships; a homosexual relationship between an adult man and a boy; suicide

The City of Your Final Destination contains infrequent violence. Examples include:

City of Your Final Destination is a romantic drama, based on a novel by Peter Cameron, with a strong cast. It is a long and slow moving film and may lack interest for children.  Its themes make it unsuitable for children under 12.

Values that parents may wish to reinforce with their children include love and selflessness. Both Adam and Pete demonstrated love and selflessness by placing each other’s welfare and happiness above their own personal needs. Omar discovered that his love for Arden was more important than his career and financial security and sacrificed both in order to be with her.

Parents may also wish to discuss the questions raised by the long term relationship between Adam and the much younger Pete which appears to have started when Pete was a boy.