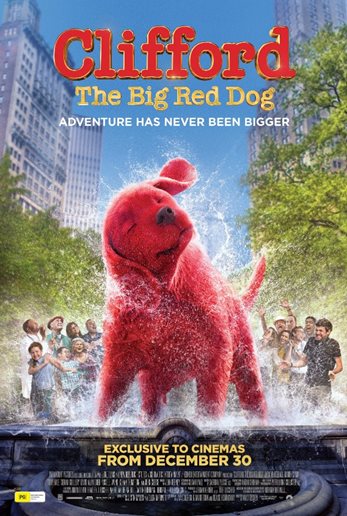 Not suitable under 5; parental guidance to 8 (violence, crude humour, themes)

Bullied by her classmates at her new school, Emily Elizabeth (Darby Camp) believes she could not possibly feel more insignificant and alone than she currently does. Things go from bad to worse when her mother (Maggie Guillory) leaves town for a work commitment and arranges for her estranged and homeless brother, Casey (Jack Whitehall), to babysit Emily. Not wanting to disappoint his niece, on her way to school one morning, Casey allows Emily to visit a mysterious tent filled with rare and wonderful animals. It is here that Emily first meets Clifford, a tiny, red, impossibly cute, puppy. Despite the instant affection on both sides, Casey makes Emily hand the puppy back to the magical proprietor, Mr. Bridwell (John Cleese). After another completely atrocious day at school, Emily returns home to find Clifford in her backpack and, as she cries herself to sleep that night, she makes a wish that they, ‘become big and strong so that the world can’t hurt them’. Emily awakens the next morning to find that Clifford is the size of an elephant. Unsure of what has happened to him she and Casey try to inconspicuously take him to a vet but Clifford is anything but unnoticeable. They soon wind up going viral online where the Lifegro company, which has been trying and failing to genetically enlarge animals in an attempt to end world hunger, sees Clifford and determines to claim him for their own purposes. Pursued by Lifegro, and at a loss as to help Clifford, Emily agrees to send the puppy overseas with her friend Owen’s (Izaac Wang) father but when Clifford is forcibly stolen it is up to Emily, Casey and a motley group of neighbours that band together, to bring him home and bring Lifegro down.

Clifford the Big Red Dog is a real life / computer animated adventure. Based on the children’s book series by Norman Bridwell, this feel-good, family, drama features an excellent cast, wonderful computer animated graphics and lots of entertaining banter between characters. Suitable for all but the youngest of viewers this is a film that families can enjoy together.

The main messages from this movie are that magic is all around us if we just know where to look; and that the people who are unique are the ones that change the world.