Cloudy with a Chance of Meatballs 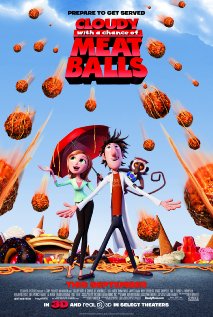 Cloudy with a Chance of Meatballs is an animated fantasy loosely based on the 1978 book (Ron and Judi Barrett) by the same name. It tells the story of Flint Lockwood (voiced by Bill Hader), a young scientist trying to invent the ultimate invention with the hope of upgrading his geek status to a popular and well-respected member of the Swallow Falls community. Flint has been tormented and doubted by many people throughout his life including his father (James Caan) who struggles to understand his son and to show him he cares. Flint’s only firm-believer was his mother. However, after her death when he was ten years old, Flint was left with only her inspiring words and her gift of a white scientist coat to encourage his creative ingenuity.

The failure of the town’s local sardine export company has meant that the residents of Swallow Falls are forced to rely solely on sardines for their livelihood. When Flint finally succeeds in inventing a machine that turns rain into food he is instantly famous and praised as a hero for saving the town from inevitable financial ruin. Mayor Shelbourne (Bruce Campbell) is particularly keen to capitalise on the food falling from the sky concept in a hope of making his town and himself the biggest and most powerful in the world. With the Mayor’s greed and Flint’s need to please, the two create a machine that ensures a smorgasbord of delectable delights plummet to the town three times a day, every day.

It is not long however before the food begins to get bigger and bigger and Flint grows increasingly concerned about the safety of the machine and the residents of the town. When Flint attempts to shut down the machine, he is stopped by the mayor and a battle begins as Flint and a few friends attempt to save the town from ultimate food doom.

End of the world, natural disasters

There is some physical violence and personal abuse in this movie including:

In addition to the above-mentioned violent scenes, children under the age of five, could be concerned about :

Some name-calling including "nerd" and "freak".

Cloudy with a Chance of Meatballs is a unique animated film with many funny characters and scenes that are sure to entertain both children and adults alike.

The main messages from this movie are to believe in yourself as a unique person with unlimited potential. Values in this movie that parents may wish to reinforce with their children include integrity and honesty.