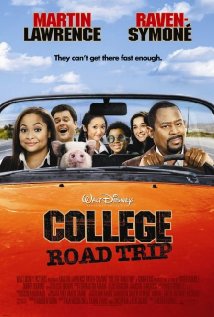 Parental guidance under 8 due to violence and accidental harm.

James Porter (Martin Lawrence) is Chief of Police in Chicago and is used to protecting his community and family.  However, James’s world is shaken when his precious daughter Melanie (Raven-Symoné) informs him that she has been successful in gaining an interview to attend her dream college in another state.  Melanie plans a girls only college road trip to check out her college options but her overprotective father intervenes and insists on taking her himself in the hope of convincing her to attend a college closer to home.  What follows is a road trip adventure filled with mishaps and comedic misfortune as Melanie and James learn about the importance of trusting, and being honest with, those that you love most and of learning how to let go.

There is some comedic violence and accidental harm in this movie including:

Apart from the above mentioned violent scenes, there are no scenes in this movie that are likely to scare or disturb children aged eight to thirteen.

College Road Trip is a lighthearted family comedy that looks at a father’s struggles to let go of his daughter who is on the cusp of independence. The main messages from this movie are about growing up and trusting those that you love to become their own person.
Values in this movie that parents may wish to reinforce with their children include: