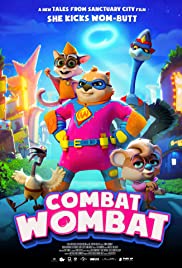 Not suitable 4 and under; parental guidance to 5 (mildly violent and scary scenes, sad theme (loss of loved ones))

Maggie Diggins (voiced by Deborah Mailman) has all a wombat could ask for: she is happily married to her childhood sweetheart Bradley (George Pullard); they both have a secure job digging tunnels for a construction company; and they have just moved into their new dream home. But then Bradley dies in a terrible work accident. Maggie blames local superhero, emu Flightless Feather (Frank Woodley), who saved everyone but Bradley, and she is determined to find out what really went wrong. Things get more complicated when Maggie saves young sugar glider Sweetie (voiced by Ed Oxenbould) and becomes famous as the new local superhero, "Combat Wombat". With Sweetie's help, Maggie discovers that something fishy is going on with alleged superhero Flightless Feather and his mysterious manager, koala CeCe (voiced by Judith Lucy).

There is some mild violence in this movie including:

Combat Wombat is an Australian animated production that tells the story of an ordinary female wombat whose life takes unexpected turns when she is confronted with loss, and when she unintentionally turns into a superhero and reveals the criminal activities of a greedy tycoon / superhero manager. Cute animations of Australian icon animals, lots of humour, a great Australian voice cast, and relatable characters make this Aussie production a good choice for a family audience with young school-aged children. A pre-school audience might be unable to follow the plot, and might get scared or upset over Maggie's tragic loss and the scary drop bear, which is why we recommend it to children over 4 and parental guidance under 6.

The main messages from this movie are that sometimes life forces you to change directions and reinvent yourself, and that it is the people around you who you care about that make life rich.