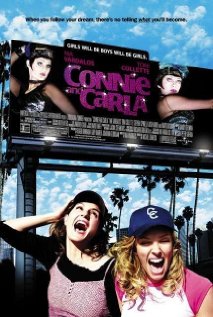 Long term friends Connie and Carla are trying to make it in the night club scene as singers, but without much success. Boyfriends Al and Mikey are unsupportive, which doesn’t help their relationships particularly Connie and Al’s. When a drug deal goes wrong, a bag of cocaine gets dropped into Connie’s bag. Connie and Carla leave the club that night and witness Al’s boss Rudi shoot Frank, their boss, for losing his money. The girls are spotted and immediately become targets for Rudi and his gang. Connie and Carla flee for their lives and drive off to find a new life, unaware they also have a kilo of cocaine. They land up in Los Angeles where they set out to find work.

After an unsuccessful stint in a beauty parlour, they try their luck at singing again. This time however they find themselves in a gay bar and when they’re told to come back for an audition, they dress in drag to help their disguise. Connie and Carla are a huge success as drag queens being very popular with the gay set. They befriend a group of four men who share their apartment block and who eventually become part of the act. One of these men, Robert, has a brother Jeff, whom Connie really likes. However the relationship seems doomed as Jeff is straight and Connie can’t break her cover and reveal she is really a woman. Jeff is also coming to terms with the fact that his brother Robert is a transvestite. Meanwhile Rudi is intent on getting his cocaine back and sends his men out across the country to find Connie and Carla. Things get very interesting when Rudi’s men finally trace the girls to LA and expose them for who they really are.

There is a little violence in this movie, none of it graphic:

There is no nudity but much cross dressing with fish net stockings and suspenders, etc.
Two men kiss.

There is drinking in the pubs.
The cocaine which is planted in Connie’s bag and which Rudi is trying to retrieve is a central part of the plot.

There is little coarse language—one use of the word bastard.

The take home message of this movie is one of tolerance and acceptance of people for who they are.