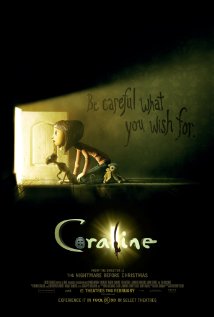 Not suitable under 8; parental guidance to 13 (themes, scary scenes)

Coraline Jones (voice of Dakota Fanning) is an unhappy child who feels neglected by her parents (Teri Hatcher and John Hodgman) after they move to an old house in the country. Busy with deadlines and dreams, her parents have no time for her and are irritated by her questions and constant pestering.

Coraline’s neighbour Wybie (Robert Bailey Jr.) gives her an odd looking doll that he found in his grandmother’s attic. The doll looks almost exactly like Coraline and is really a spy for an evil, spider-like creature from another world. The creature uses handcrafted dolls to see into the lives of children and then lures them to her world by presenting them with all the wonderful things that they feel are missing from their own.

The portal to the alternative world is a small doorway in Coraline’s bedroom. Coraline finds the entrance and, at first, also finds herself in the middle of the life she always wished that she’d had. She has parents who talk to her and are interested in all that she does, a mother who cooks delicious meals and more pleasing versions of her neighbours.

However, the more that Coraline visits this parallel world the more she begins to see that things are not as they appear and she soon finds herself in a struggle to escape and return to her real life.

Some of the above mentioned scenes may also disturb children in this age group.

Coraline is an animated thriller containing some alluring and creepy special effects. Because of the themes and scary scenes it is not a family film, but one that may be enjoyed by older children and anyone who likes 3D special affects.

This movie could also give parents the opportunity to discuss with their children the importance of communication and empathy in maintaining healthy relationships.

The film also presents a reminder to parents to watch their words and the way that they speak to their children.