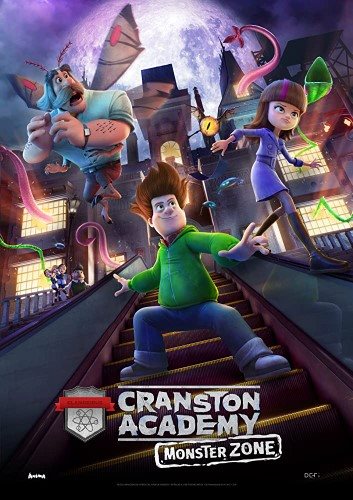 Not suitable under 7; parental guidance to 8 (violence, scary scenes)

Danny Dawkins (voice of Jamie Bell) is a 15-year-old science whizz who is teased at school for being a genius. Danny is recruited to the Cranston Academy by a Miss Evans, where he meets fellow student and roommate, Liz (voice of Ruby Rose). Danny feels he is, at last, understood but is dismayed to find that the head of the school, Professor Stern, dislikes having him there on a scholarship. Danny feels he needs to invent something amazing to prove his worth and to keep his place at the school.

Danny discovers an abandoned and broken atomic particle reactor, which he decides to repair to show his abilities. However, Danny gets into real difficulties when, with Liz’s help, he gets the reactor going and opens a portal to a 5th dimension. Inside the dimension is a world full of monsters who are intent on causing harm. When the monsters escape through the portal the real problems begin and Danny and Liz have to find a way to get them back and close the portal forever.

Cranston Academy: Monster Zone is an animated monster/horror movie which is quite humorous and made for laughs. The film is intended to be light-hearted, however, it is quite scary in parts and is therefore not suitable for young children. Parental guidance is recommended for 7 – 8 year olds who might still be scared by the content of the movie.

The main messages from this movie are that genius is a product of great minds working together; and that more can be achieved by working collaboratively.