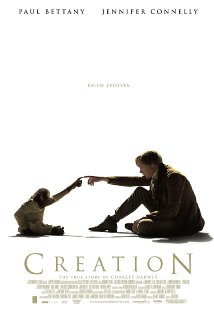 Not suitable under 8, PG to 14 (Scary scenes; Disturbing themes)

Creation tells the story of a sickly Charles Darwin (Paul Bettany) both as a loving father very closely involved in his family’s life, and as the talented naturalist who developed the world-changing theory of natural selection. It shows how his private life influenced and conflicted with his life’s work.

Charles Darwin and his wife Emma (Jennifer Connelly) struggle to deal with the grief and guilt from the death of their second child Annie (Martha West). Annie was her father’s favourite and keenly interested in his work. Since her death Darwin has been haunted by his daughter’s memory and has imagined conversations with her.

Darwin’s grief and wavering religious faith play a crucial role in his problems with finishing his book ‘The Origin of Species’. He is prevented from writing by his concerns about contradicting his wife’s religious beliefs and about the controversial nature of his theory.

Death of a child; Grief and loss; Children as victims; Cruelty to animals; Loss of religious faith

Children in this age group may also be disturbed by the scenes described above, particularly those involving children and family arguments.

Younger children in this age group may be disturbed by theme of the death of a child and its effects on the family.

Creation is an at times sombre and gloomy, yet moving, drama. Scary scenes make it unsuitable for children under eight, while the film’s themes and sometimes confusing flashbacks and scenes of conversations between Darwin and his dead daughter make it more suited to an adolescent and adult audience.

The main message from this movie is the importance of family.