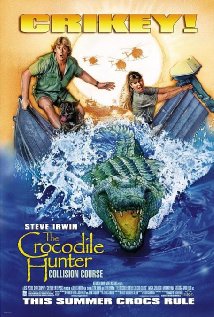 Not recommended under 5, PG to 13 (Viol. Scary Scenes)

A dangerous crocodile is causing havoc on a local farmer’s property, attacking her calves and threatening her livelihood. Brozzie is a tough, unfriendly farmer who is determined to rid the river of the crocodile and sets out to shoot it. The local ranger tries in vain to deter Brozzie and so decides to call in the Crocodile Hunter Steve Irwin and his wife Terri to relocate the croc.

Meanwhile a US spy plane explodes somewhere over Queensland dropping a satellite beacon containing highly sensitive data. US agents are dispatched to Australia to retrieve the beacon which they trace to Brozzie’s property.

Relocating the aggressive croc is a very dangerous mission for the Irwins and proves to be no easy task. They eventually manage to get the croc onto the boat and set off to relocate the animal.

The US agents discover that the Irwins are in the locality of where the device is and decide that they must be spies. The chase is on as the US agents as well as their rival Australian counterparts, track down the Irwins. The ensuing result is quite funny with the Irwins totally unaware of all that is going on. They believe their pursuers to be poachers after the croc. The beacon is finally discovered when it is ‘passed’ by the croc who had of course, swallowed it. Steve has no idea what it is and uses it as a ball. All ends well however, as the croc gets moved to a new river system and the Americans get their beacon back

There is some violence in this film including:

There is quite a bit of scary material in this movie including:

The scenes with the crocodiles and the snakes display very real danger and Steve Irwin puts himself into very dangerous situations. This could scare older children.

There is very little sexual reference.

No nudity or sexual activity.

This is a conservation movie and the main message that Steve gets across with much enthusiasm is that animals belong in their environment and should be left alone in order to maintain the fine web of life.