Croods, The: A New Age 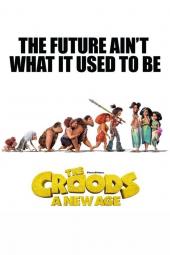 The Croods: A New Age begins with seeing Guy (voice of Ryan Reynolds) orphaned as a child. He grows up alone but as a teenager he meets Eep (Emma Stone), a member of the Crood family. It is instant attraction and Guy is welcomed into the Crood family. Eep’s father, Grug (Nicolas Cage), however, is not happy with the thought of Guy and Eep setting out on their own and leaving the tribe.

Grug therefore, sets out to find a paradise where they will all be happy and, in doing so, finds the walled home of Phil (Peter Dinklage) and Hope (Leslie Mann) Betterman. The Bettermans were friends of Guy's parents and sees this chance encounter as their answer to finding their daughter, Dawn (Kelly Marie Tran), a partner in Guy. The Bettermans believe they are better and more evolved than the Croods and set out to rid themselves of the Croods, while keeping Guy. However, things get complicated when Grug eats the forbidden fruit – bananas, and they find themselves under attack by an army of aggressive punch monkeys.

There is a lot of violence throughout this movie such as punching, throwing rocks and spears, and physical combat. Some examples include:

The Croods: A New Age is an animated movie set in prehistoric times. The cave people are often in peril and their lives are all about survival and finding food. As such, there is a lot of comic violence, however, some of the scenes are quite intense and scary. There are also several scary looking creatures. The movie is therefore not suitable for children under 6 and parental guidance is recommended for children aged 6 – 7 years old.

The main messages from this movie are that we are stronger when we work as a group and that we shouldn't fear people who are different.