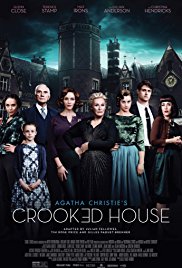 Not recommended under 12; parental guidance to 13 due to violence and scary scenes and themes.

Set in the 1950’s, Crooked House is based on an Agatha Christie novel. Charles Hayward (Max Irons) is a former spy who is now trying to establish himself as a private detective. He gets an unexpected visit one day from Sophia de Haviland (Stefanie Martini), a woman he had a relationship with in Cairo. Sophia asks him to investigate the death of her wealthy and influential grandfather, Aristide Leonides, who was found dead in his bed, poisoned by an intravenous injection, which was meant to contain insulin.

Crooked House is a classic Agatha Christie detective mystery. It is set in the 1950’s and is quite slow moving with several twists and turns. The outcome is quite surprising and somewhat disturbing. It is therefore more suited to children over 13, and adults.

The main message from this movie is that people are not always as they appear to be.

Parents may also wish to discuss how we should deal with resentments and hatred before they result in ourselves or others taking extreme measures.