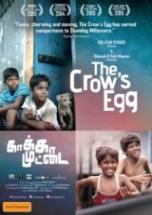 Not recommended under 10; parental guidance recommended 10-13 (Themes and violence; in Tamil with subtitles)

The Crow's Egg is an Indian comedy drama (in Tamil with English subtitles) about two impoverished young brothers, Periya Kaaka Muttai (J Vignesh) and Chinna Kaaka Muttai (V Ramesh). They live in a slum with their mother and grandmother, and spend their time stealing and eating eggs from crow's nests. This leads them to refer to each other as Crow's Egg the Elder and Crow's Egg the Younger. After begging their mother and grandmother for various unaffordable toys and possessions, they are eventually given a television. This gift sparks a desire in them to try pizza, after they witness a particularly engaging advertisement where a man happily eats a pizza of his own.

A video of the children being chased away and struck by the pizzeria supervisor ‘goes viral’ and the media pressure that ensues forces the pizzeria owner to publicly apologise to the boys for the discrimination. He offers them ‘Free pizza for life’ but the boys eventually realise that perhaps the dream they were chasing all along was the wrong one.

Poverty; discrimination; impact of the media; family and relationships

Nothing apart from the violent scenes descibed above

In addition to the above-mentioned violent scene, there are some scenes in this movie that could scare or disturb children aged five to eight, including the following:

Younger children in this age group may also be worried by the unfair treatment of the boys by the staff in the pizzeria and their guilt at the death of their grandmother.

There is limited product placement, including:

The Crow’s Egg is a heart-warming story about two young slum-dwellers who go through a process of personal development before discovering what is truly important in their lives. The film highlights the desire of the young brothers to explore places and tastes they have never experienced, but also presents joy in things that are both simple and familiar. The movie depicts the strength and importance of friendship and familial bonds, but also explores darker themes such as poverty, racism and discrimination.

Younger children may be upset by the violent and discriminatory treatment of the boys and the film is in Tamil with English subtitles, so may be hard for non-readers to follow. It is therefore not recommended for children under 10 with parental guidance recommended for older primary school aged children.

The film raises a number of issues for discussion with older children, including: