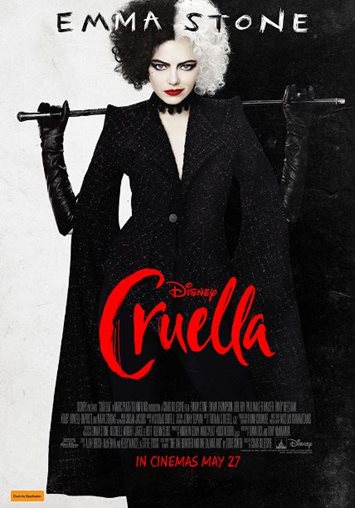 Not suitable under 11; parental guidance to 13 (violence, scary scenes, themes)

Struggling with what appears to be a borderline personality disorder, the young Estella (Tipper Seifert-Cleveland) tries to keep her raging and mean alter ego, Cruella, under wraps. Loved unconditionally by her mother Catherine (Emily Beecham), she does her best to remain calm and kind but when school bullies repeatedly taunt and torment her, she loses control and is ultimately expelled from the school. Without any other option the pair set off for London where both dream of taking the fashion industry by storm. The quick stop they intended to make on their way turns tragic when Catherine is pushed off a cliff by three dogs. A devastated and heartbroken Estella makes her way to London alone and soon after joins Horace (Paul Walter Hauser) and Jasper (Joel Fry), a pair of petty thieves making a living from stolen goods. With Estella’s (Emma Stone) sewing skills and fashion sense she quickly takes their thieving operation to the next level by creating numerous costumes for the varied places they target, though all the while she is dreaming of working for The Baroness (Emma Thompson), owner and operator of the most famous fashion house in London. When finally given a chance to work for the icon, Estella discovers that someone else is to blame for her mother’s death and she vows revenge, no matter the toll or what it will take. She unleashes Cruella (Emma Stone) who will bring vengeance and possibly justice.

Death of a parent; Abandonment; Revenge; Grief; Power trips and thinking yourself above the law.

Cruella is a dark drama that takes you back in time to show you how one of Disney’s most notorious villains came to be. Where once there was only fear and disgust, audiences will begin to have empathy and understanding for a character that was largely shaped by the actions of others. Due to its dark nature and focus on revenge this is not a family film and will be best enjoyed by adults and older children.

The main messages from this movie are that if you put others before yourself you won’t achieve anything; and that sometimes family is all that you have.